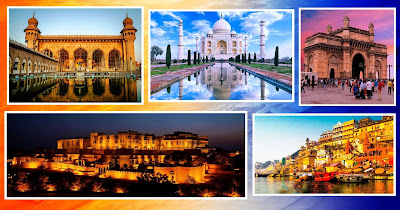 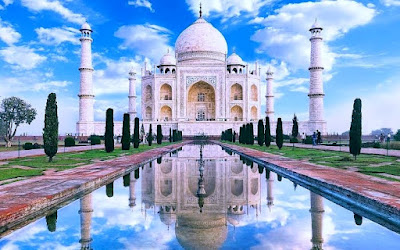 Taj Mahal is an ivory-white marble Mausoleum in India. It placed on the bank of the yamuna river. It created in 1632 by the Mughal Emperor Shah Jahanto house the tomb of his favourite wife, Mumtaz Mahal, It’s also houses the tombe of Shah Jahan. Taj Mahal also declared as a World Heritage site by UNESCO in 1983for being “the jewel of Muslim art in India”. It was declared as the winner of  New 7 Wonders of the World in  2007.

The architect of the Taj mahal is Ustad Ahmmad Lahauri. It’s cost was estimated Rs-32 Millions in 1653, which in 2021 approximately 70 billions rupees.  It’s took more than 17 years and 2000 workers to make this historical Mughal Emprior with many elements of Islamic desing arches, minarets and an onion shaped dome.

The best time to visit in Taj Mahal is early Morning or early in the Evening. Its should be great if you can see the Taj Mahal’s reflaction from the Bank of Yamuna River.

# 2 THE HOLY CITY OF VARANASI 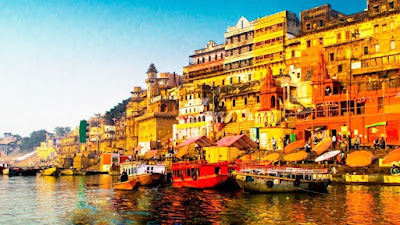 The holy city of Varanasi is a sacred Hindu city on the bank of the Ganges River, because it us belived to have been the city of lord SHIVA. It’s placed in Uttar Pradesh, India. Many of the people belived that the river Ganges pay its respect to Lord SHIVA by the direction of flowing. Millions of people visit Varanasi in every year to Purify Themself by Bathingin Ganges river at Sunrise. There are a lot of lord Shiva mandir in Varanasi.

Some Hindu believed the if they died in Varanasi they were able to attain Moksha Soonerafter the death. In search of the Moksha Sooner some people go there when they are close to death, also some people  have their Ashes Scattered there by relatives.

Varanasi boat  more than 100 ghats, the largest being Dasashvamedh Ghat and Assi Ghat. There also have to seeing Banaras Hindu University established in 1917. It’s have a lagre library with more than a million books , and Bharat Kala Bhavan museum. 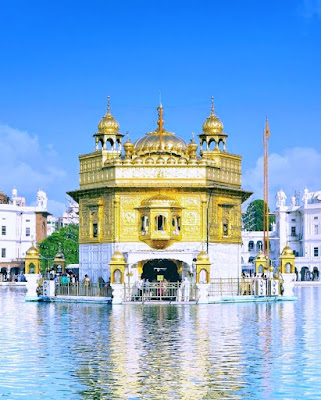 Harmandir Sahib founded in 1577 by Ram Das, Amritsar is an Important hub of Sikh history and culture. This is the main attraction, opened in 1640 as the Golden Temple for its beautiful gold decoration. This temple made in a blend of Hindu and Islamic styles.

It’s lower marble section swon the animal motifs, while the large golden dome present the lotus flower and purity to Sikhs. Also visitors are equally impressed with this temple spiritual atmosphere of continuously enhanced Sikh Holy books by the prayers of the temple.

Jaisalmer is a city of India in Rajasthan, also known as “THE GOLDEN CITY”. It’s was the Bhati Rajput Kingdom in mid-12 centuries. In this city yellow sandstone used in most of buildings, which is the reason behind “The Golden City” named. Jaisalmer, The Golden city cane from the sand dunes of the Thar Desert. This city have splendid old mansion, magnificent gateways, and most popular Jaisalmer Fort – which also known as The Golden Fort. This Fort  daunting 12th centuries structure that rises high above the town.

To visit it’s have palaces, temples, and fine old mansion, and most popular The Golden Fort surrounding the hole city with its massive big gates in courtyard. Where you can find the Maharaja’ Palace. Also there was a huge number of Jain Temples from the 12th to 16th centuries. Each temples decorated whit fine marbel of Italy, sand stone images, and brightly painted ceilings.

Don’t miss to visit the well-preserved 1000 years-old library also know as Gyan Bhandar, with its many 16th-centuries antiquities and manuscripts.

# 5 MUMBAI: THE GATEWAY OF INDIA 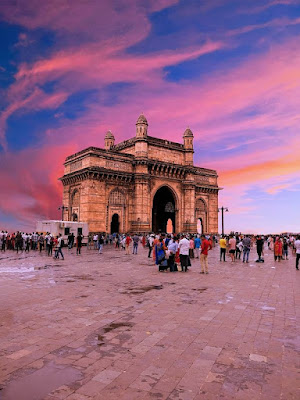 In 1911 the King George V and his wife Queen Mary arrived in Mumbai Harbour, this is the reason behind build The Gateway of India. It was opened in 1924 with a pomp and ceremony, in this time this is the tallest structure in the city.

The Gateway of India design is constituted of a large arch, with a height of 26m, built in yellow basalt and indissoluble concrete designed in the Indo-Saracenic style. 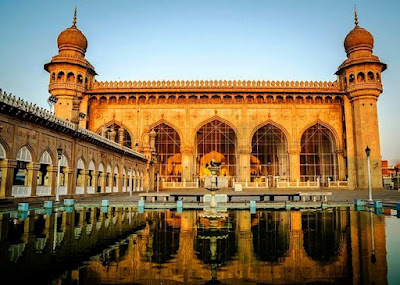 Hyderabad’s Mecca Masjid also known as Makkah Masjid, is one of the world’s largest mosques and one of the oldest in India. During the year 1614 Mohammed Quli Qutub Shah’sstarted built this historical mosques, it’s took 80 years to complete. The ruler of Hyderabad personally laid its foundation stone. The mosque was built by 8,000 workers.

The Makkah Masjid is one of the best architectural works of the Qutb Shahis. It is made of dressed stone. The Masjid’s prayer hall measures 225 feet(69m) by 180 feet(55m), and 75 feet(23m)tall ceiling.

Amer Fort  also known as Amber Fort is located in a town Amer with an area of 4 Square kilometres. The Amer Fort sitting 11 Kilometres from Jaipur, the capital of Rajasthan. King Alan Singh Meena built the Amer city and Amer Fort in 976 AC. It was also ruled by the Kachwah Rajputs.

This place was declared as UNESCO World Heritage Site in 2013(37th session). Built of red sandstone and marble, the charming majestic place is laid out on four levels, each with a courtyard. These include Diwan-i-Am, or “Hall Publick Audience”, Diwan-i-Khas or “Private Audience Hall”, Sheesh Mahal (Mirror Palace) and Sukh Niwas where a cool climate is artificially ventilated. 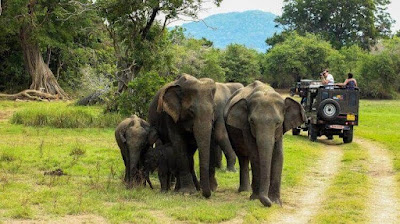 One of the india’s most popular trousit attractions Periyar National Park and Wildlife Senctuary, surrounded by a lake built in 1895 by the British Engineers, to provide water to the city of Madurai. But in this time Periyar Nation Park is one if the biggest Wildlife Sanctuary. It is an elephant reserve and a tiger reserve.